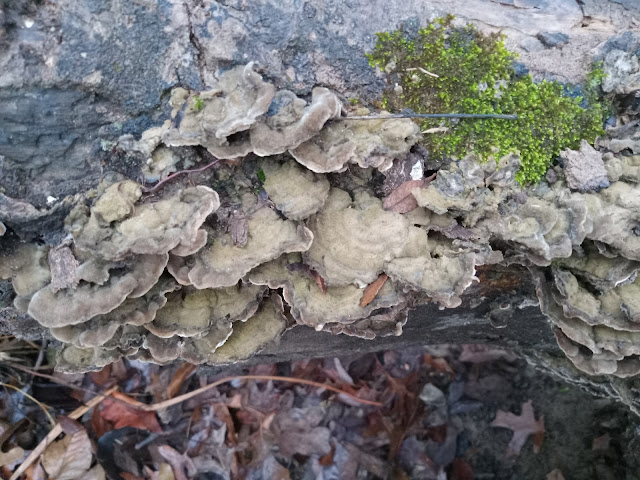 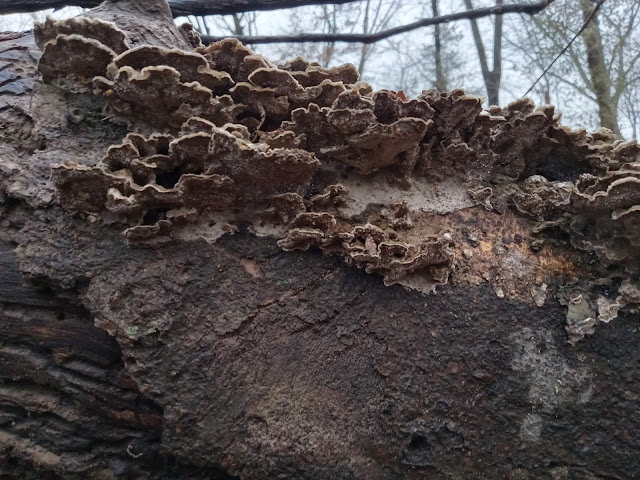 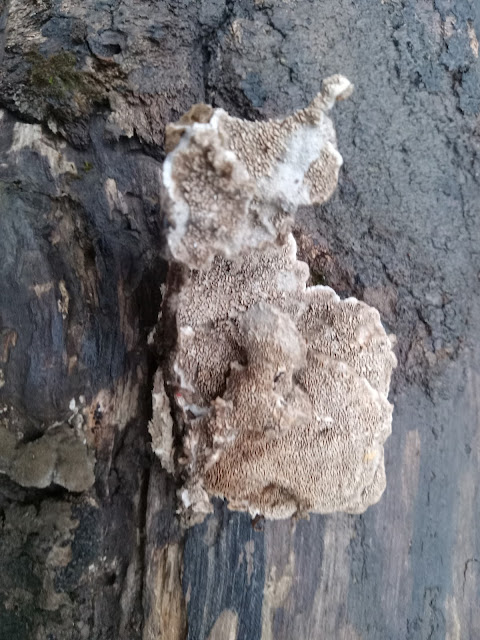 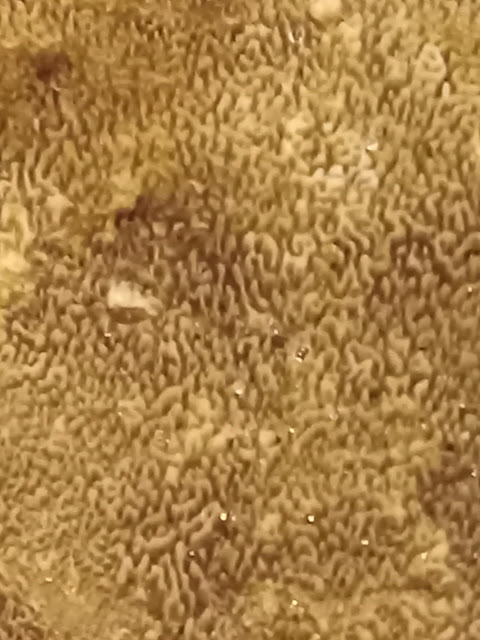 The Mossy Maze Polypore, Cerrena unicolor, is typically between 3 and 10 cm wide, though it fuses laterally. The cap is highly irregular and velvety. It appears as if it's covered in dust. It has concentric ridges and is often covered in algae or moss. The fertile surface is whitish to smoky brown-gray. The pores are labyrinthine becoming tooth-like. The flesh is up to 3 mm thick. A thin dark zone separates the cap from the flesh. The mushroom is tough and flexible.
I find much joy in identifying flora and fungi. The chief pleasure is that in doing so I observe closely and see the wondrous architecture of things, and though identifying organisms is sufficient unto itself, I often think that its chief value is in being the necessary preliminary to the ultimate discipline: ecology, the study of relationships. Everything is tied to everything else, often in ways fascinating and strange. Consider the following, taken from The Mushroom Expert:
"But identifying Cerrena unicolor isn't nearly as thrilling as discovering the fascinating relationship it has with the horntail wasp (Tremex columba) and the ichneumonid wasp (Megarhyssa spp.). It's a complicated story, and I admit I have not done exhaustive research, but the broad strokes are as follows:
Cerrena unicolor spores get into the ovipositor of the wood-boring wasp (the horntail) when she drills into hardwood logs (often logs of beech). The spores get carried around with the wasp's eggs, and wind up germinating when eggs are laid; mycelium grows quickly and serves as the food source for larvae. But since horntail populations would get out of control without a predator on horntail larvae, the ichneumon wasp enters the picture; it is parasitic on horntail larvae. Cerrena unicolor apparently helps the ichneumon wasp find the horntail larvae buried in the wood by emitting a pheromone."
In short, the Mossy Maze Polypore uses the Horntail Wasp to spread its spores, and the Horntail Wasp uses the Mossy Maze Polypore to nourish its young. And then, with prompting from the mushroom, the Ichneumon Wasp balances the relationship.