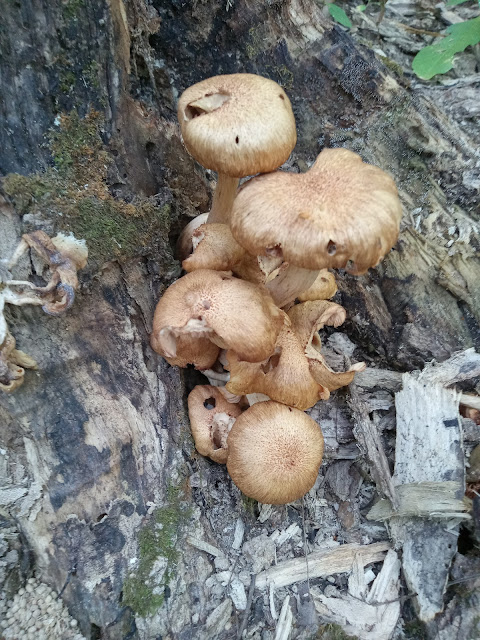 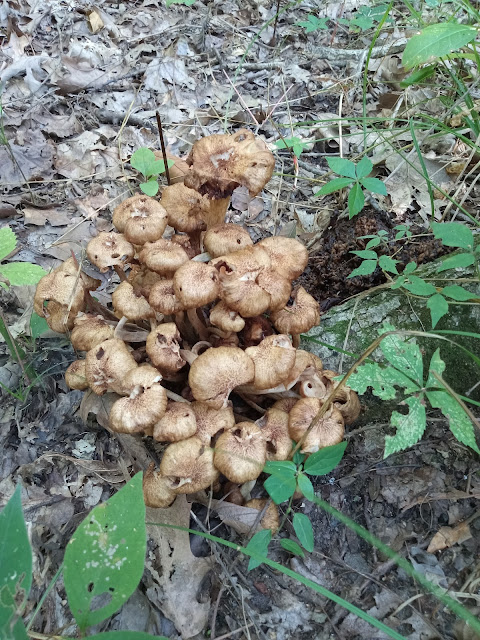 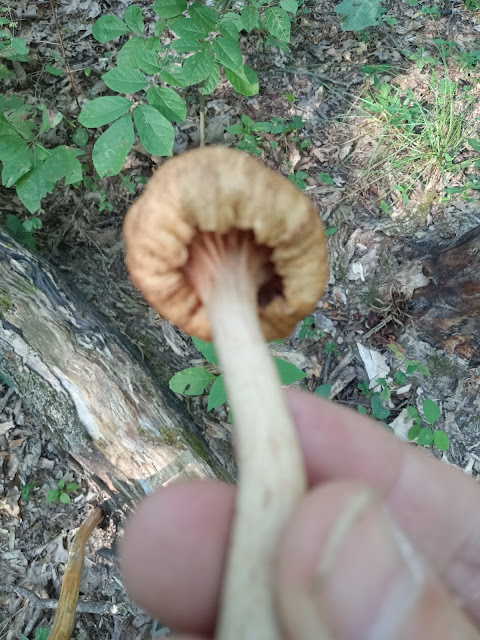 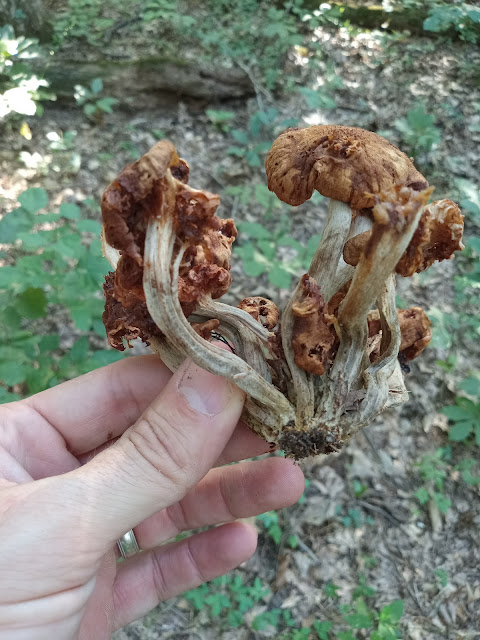 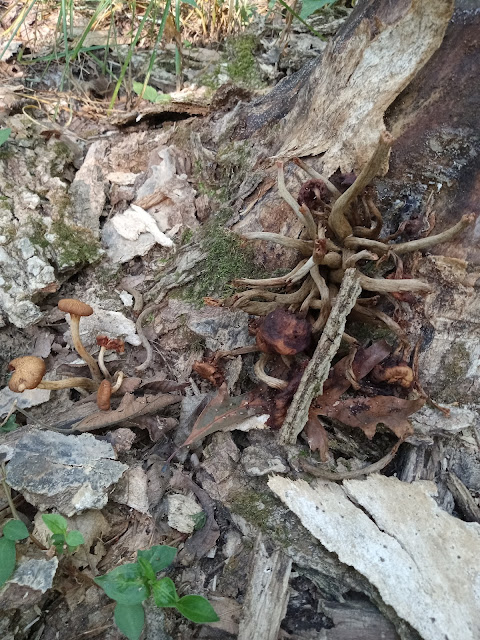 The Ringless Honey Mushroom, Armillaria tabescens, is a September mushroom. Were I a shut-in who didn't follow the weather, I would know the first cool nights of the year had arrived just by seeing these growing in the yard.
This is a fairly easy mushroom to identify, once you see it in person. It has a distinctive tawny cinnamon color. The cap is dry and convex becoming flat; it's covered with dark scales and is often faintly striate. The gills are nearly distant, sometimes decurrent. The stem is lighter than the cap, and lacks a ring; this is a key feature to distinguish it from others in this genus (Armillaria means "ring"). The interior flesh is white or light tan. Another diagnostic feature is its cespitose growth form, which you can see in the second-to-last photo. This mushroom is edible (though bitter), but harvest only the youngest specimens. They quickly decay, and it's likely that when you find these you'll also find nearby a clump of insect-riddled black goo—the destiny of all uneaten specimens. This mushroom is both parasitic and saprobic. Nearly all the ones I saw on this outing in the woods were saprobic. They appear to be growing from the ground, but they're actually growing from buried wood. This mushroom is sometimes parasitized by another mushroom, Entoloma abortivum.
An oft-quoted fact about the Armillaria genus is that it hosts some of the largest organisms on Earth. Merlin Sheldrake writes in Entangled Life: "The current record holder, in Oregon, weighs hundreds of tons, spills across ten square kilometers, and is somewhere between two thousand and eight thousand years old" (pp. 3-4). He's referring here, not to the fruiting body (what we call the mushroom), but the networked strands of mycelia that live underground. The difference can be explained by a simple analogy: what a tree is to an apple, the mycelium is to the mushroom. One covering 37 acres has been found in Michigan, and a 1500-acre one has been found in Washington.
As awesome as these facts are, for me, what's more interesting is how they lead us to rethink the meaning of "organism." What exactly is it that has persisted for thousands of years? It's certainly not the individual hyphae (what the mycelium is made of). Those evanescent strings are in a constant state of growth and decay and measure only a few microns in width. Ultimately, we come to the conclusion that what persists is something we might term "information," and that answer raises even more questions. Another question that comes to the fore is: what is the difference between an individual and an interconnected network of clones? In Rocky Mountain Natural History, Daniel Mathews writes about a clone of an aspen tree in Utah that "has 47,000 stems, covers 106 acres, and weighs about 6600 tons—arguably the largest living thing" (p. 117).
Such facts are truly astounding, but what I love best about studying the natural world is that it is a gate into the realm of reality, and the realm of reality is ever beyond the familiar anthropocentric categories we use to navigate this world. This is what Buddhists call sunyata, an easily misinterpreted word that is far better to be experienced than explained, one that once experienced can liberate you from your blinkered existence.
As I write this, Roe v. Wade having been overturned, millions of humans and their service-minded politicians are arguing about when life begins: is it a heart-beat? Is it the first breath? Is it the cutting of the umbilical cord? Is it the fertilized egg? Were humans better versed in the realm of reality, they would better understand that whatever answer we give to this question is merely conventional. Nature over-leaps "begins," and nature never knows "begins." Nature does, however, know transformation, and we can all use some contact with this miraculous transformative power. It opens the door and lets fresh air in.
Update: out for a walk in the woods September 16. The Ringless Honey Mushroom was everywhere. I've never seen it so abundant.
The photo below was taken September 21. It shows the mushroom in its various stages. I would only harvest those to the left. The others (except for the tiny group in front) are too mature and are likely to be buggy and bitter. 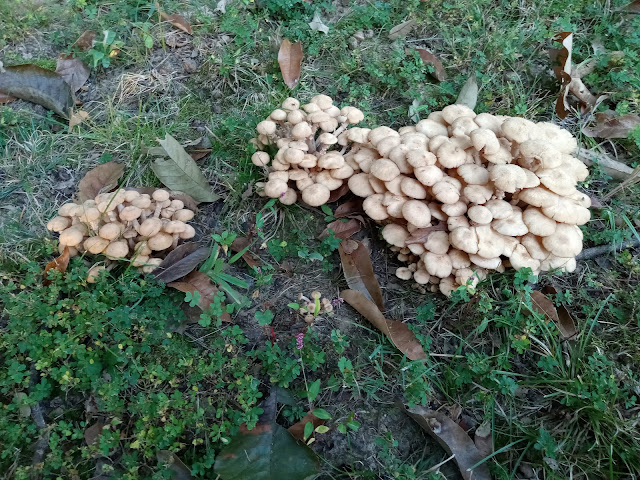