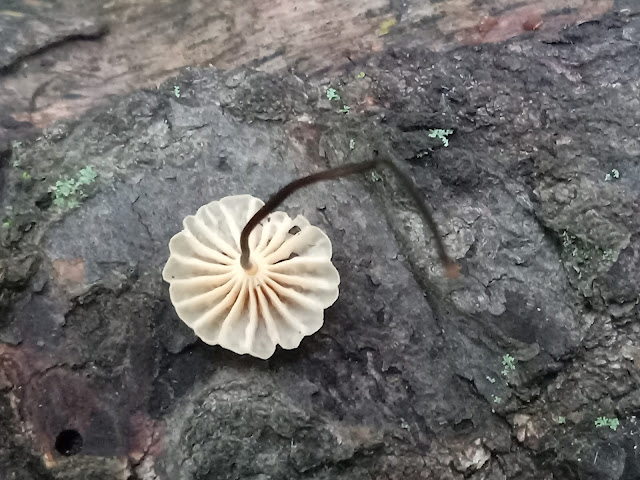 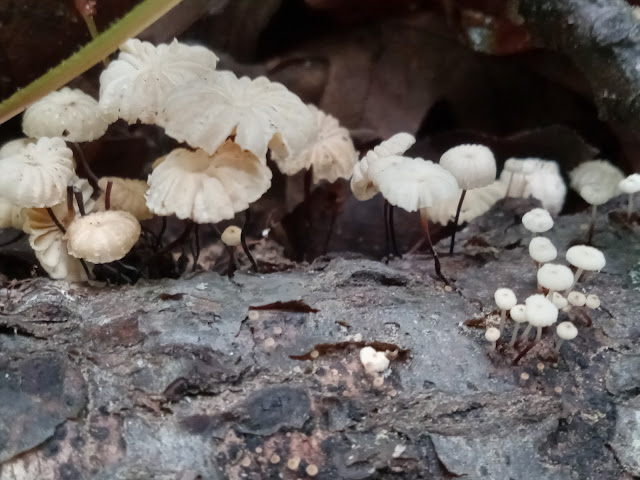 Pinwheel Marasmius, Marasmius rotula, is a tiny mushroom: the cap is less than 1.5 cm across, and the stem is less than a millimeter wide, though a couple guide books list it as 1-2 mm wide. The gills are well spaced. The cap is white or cream, pleated, and convex with a central depression with a dark spot in the center.
Kuo says that this species is nearly identical to M. capillaris, but that grows on fallen leaves rather than wood as M. rotula does. These seem to appear overnight after a rain. In truth, they were already there, just shrivelled into invisibility, but rain restores their bodies--this is a characteristic of the Marasmius genus.
Rain yesterday and overnight. Walking in the woods in the morning amid fog. Everything is wet and cool. I think of yin. We know yin and yang as opposite, complementary concepts: yen is the cool, dark, moist, soft female aspect; yang is the masculine hard, dry, sunlit aspect. We often think of these as abstractions, but they're not abstractions; they are realms of being. Mushrooms are the quintessential inhabitant of the yin realm.
Update: I studied some more of these on July 27. All the specimens I looked at had stems less than a millimeter wide. Some were as thin as .3 mm.