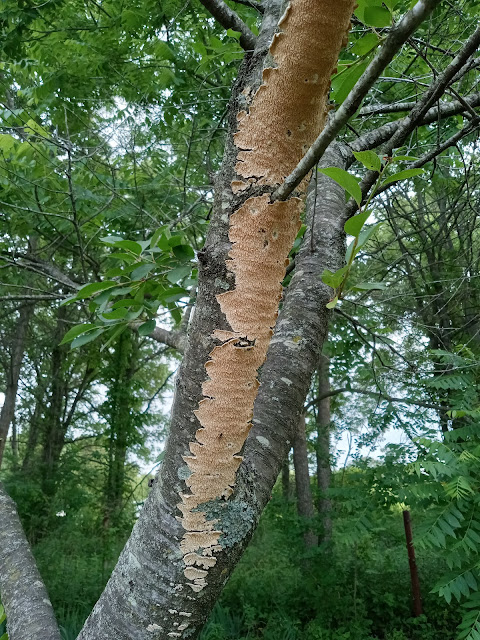 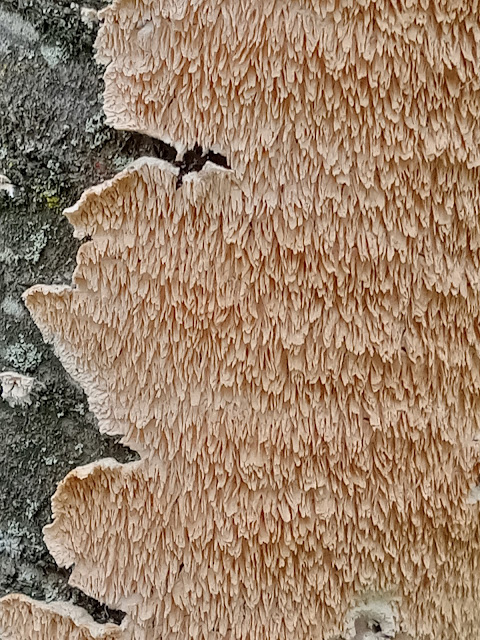 Ochre Spreading Tooth (Steccherinum ochraceum). This mushroom is growing on the dead limb of a sour cherry tree (Prunus cerasus). This grows in resupinate patches that have ochre teeth that are up to 3 mm long and are often forked at the ends, giving the fertile surface a shaggy appearance. What little there is of an upper surface is covered in velvety hairs best seen with a hand lens. The similar Irpex lacteus has milky-colored teeth.
Evolutionary theory posits the kinship of all life forms, all having (to a greater or lesser degree) family-resemblance. Thus, two dissimilar life forms will have an intermediary between them (living or extinct). The tooth fungi are an intermediary between polypores and agarics. The teeth are essentially pore-tubes that have separated from each other. The teeth of this mushroom are somewhat flattened, so it's easy to imagine how they could fuse and become gills. The Beefsteak Polypore, Fistulina hepatica, is itself an intermediary between the polypores and tooth fungi, having crowded but distinctly independent pore tubes. Thus, you can see evolution right in front of you. The only missing component is time, and figuring out what came first is something I'll leave to my betters.